Musings on the Chain-mail Bikini

So I forgot to site a source way back in my LTUE presentation. A lot of my info and terminology came from talking with my older brother Paul, an excellent fighter and the guy I took Tae Kwon Do with way back when I started. He's awesome and knows his stuff and I appreciate his help, especially when it comes to kicking and stabbing things.

There's been a huge controversy in internet land over the way Catwoman and Starfire have been treated in the recent DC Universe reboot. There's been all sorts of takes on it, but basically it all boils down to this:
Camp A (mostly men): These are stories about sexually liberated women expressing their independence!
Camp B (mostly women): These are stories about sex-props being used to fulfill men's fantasies.
Camp A: You're just hating on sluts! Their actions are completely in line with their character!
Camp B: Their 'character' is nothing but an excuse to have them strip. Most of the time you can't even see their face as the camera is too busy with cleavage shots.
Camp A: These stories are about empowered women! They're great role models!
Camp B: These stories are about how women are only good for sex and serve no other purpose. They insult and alienate female readers.
So that's the debate. As I'm sure you can guess, I'm clearly in Camp B. But this debate made me think about something. I mean, sexy strong women are great characters, of course. So many women I know love them because they're, well, strong and sexy which are two things most women want to be. But somewhere along the way men realized strong, sexy women make great pin-ups, and fantasy has never quite recovered. I mean, look at this: 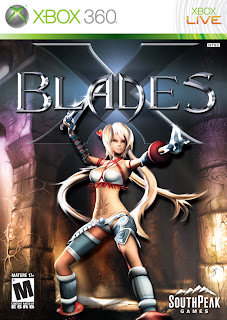 You cannot convince me this character is aimed at anyone but 14 year-old boys.  I know many women who're openly offended by characters like this.  Ever wonder why women are still the minority among video game, RPG and fantasy book users? That right there.
Hopefully though, as we move out of the dark ages and into the world of realistic female characters, there's a few things I think we can take with us.
1: Not every woman has to be sexy.
Why do we love Spider Man? Because behind the suit and powers he's an average guy. Yeah he's drawn with sick abs, but Peter Parker is really all about the nerdy quirks, the living paycheck to paycheck, and the socially awkward dating life. Maybe it's just the movies (I'll admit I haven't read many comics) but that's how he feels to me, and that's why many guys connect with him. He faces many of the same problems they do, he's just cool and super-powered too. He's like them, but with wish-fulfillment added in.
But the problem is female characters are wish-fulfillment for male readers, not female.
As far as I know there's very few heroines you'd call “every-woman."  We have Rogue and Storm from the X-men who are strong and sexy and actually wear clothing, but sometimes it seems wearing clothing is the closest American heroines get to having an original personality.  Now if you're good you can certainly give a strong, sexy scantily-clad woman a personality, but it's generally either the same personality as every other strong, sexy, naked character, or her personality falls flat because the way she acts and the way she dresses have nothing in common with each other.  And frankly, there's only so many heroines you can tolerate who're former strippers before you realize they're all less about exploring a character and more about trying to justify making her strip on-page for the readers.
But there's another thing I've learned that I think creators of all types need to know. Something I've discovered is especially true since I got married:
Bikini-clad warriors just aren't sexy.
They aren't. Yes skin has it's place, but as I said above, if you really want me to fall for your character, I need to care about her as a person. Minds are sexy. Personalities are sexy, and yes, bodies are sexy if there's a reason for it.  The game Catherine is great because it's a story about sexuality and the title character is a seductress.  Jane Doe the warrior doesn't work fighting in lingerie because all chances to learn and fall for her as a person have been stopped by her outfit.  It's like some people put a little gremlin into their book, game or comic who's job is to hit you over the head and scream “SHE'S GOT BREASTS! SHE'S GOT BREASTS! DID YOU NOTICE? SHE'S GOT BREASTS!!!”
That's why these female characters offend me. I feel like no one gives me the chance to get to know them because obviously the only reason I or any man could care about her is her cleavage. Anyone remember this woman? 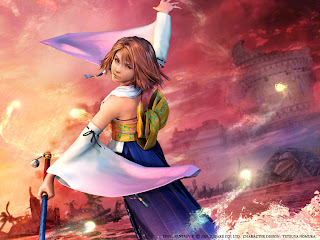 Yuna, the heroine of Final Fantasy 10.  Yes she wasn't the point-of-view character, but like Tidus I fell for this woman.  She wasn't tough in the conventional sense, the whole point of the game was you played her body-guards because she needed protection, but she was still an amazing character.   A quiet girl facing her own death on a quest to save the world.  A woman who stood up to the responsibility placed on her shoulders and made decisions for the group.  It was this mixture of strengths and weaknesses, of power and quiet contemplation that made me love her as a character. 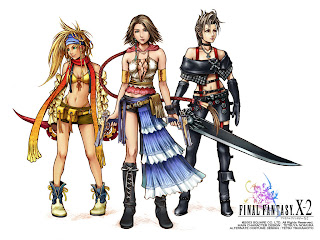 Then they made the sequel:
And I couldn't play it.  I just couldn't.  You stuck her in booty-shorts, a few straps of white cloth and gave her guns?  Why?
"Cause she's powerful now!  See the cleavage?"
But what about her personality?  The reasons I loved her character before?
"Who cares!  She's got more cleavage now and guns!  And did you see all the skin on her friends?"
I couldn't play the game.  No one cared about her personality anymore.  I couldn't take it seriously or pay attention to the character's inner struggles with their outfits screaming at me so loud.  It's like they assumed I never matured beyond middle school and I must think women only exist to be objectified. But guess what, I'm married. I understand women, and I find them attractive for a whole group of reasons beyond their cup-size. If you won't present your female characters to me as anything but eye-candy, then I'm not going to care enough to invest in them emotionally.  That's why I love things like this blog, where we get to see women being sexy and strong in a way that's realistic, intelligent and doesn't offend my post-adolescent mind.  I'll take these women over a bikini-clad, 2-D sex-bot any day.
The problem comes when you apply a double standard to female sexuality. Every women is supposed to be strong and sexy, even though in reality not all women are (nor necessarily want to be) strong and sexy, and certainly not all male characters are strong and sexy. Women are supposed to pursue their own 'liberated' sexual desires, but really that just becomes a new way for men to objectify women because to them, 'liberated' women just mean skin and promiscuity. Chain-mail bikinis and their ilk aren't practical, they don't empower women to be the equals of men on the battlefield, they restrict her and they mean the only thing that can ever be on her mind or the mind of anyone around her is sex. That doesn't lead to empowerment, that leads to restrictive sexism (as amusingly illustrated below).
If you want to respect and empower women, forget about the ridiculous outfits, forget about 'sexually empowering women,' just forget about sex and the female body. Let women be people with the same hopes, dreams, flaws, shortcomings, and insecurities as men. Then, once you've matured past middle school we can talk.
Posted by Unknown at 1:02 AM